Underwater hockey, also referred to as Octopush and Water Hockey, was created in England in

1954. Today, men and women play the sport recreationally, professionally and at universities around

the world. Every other year, CMAS (the Confédération Mondiale des Activités Subaquatiques)

holds the World Championship, in which over 20 countries (including the United States)

compete for the world title.

The Tri-Nations Cup also takes place every other year between

Australia, New Zealand and South Africa, and 35 men’s’ teams and over 32 women’s’

teams compete. Because of its underwater setting, there is no risk of injury from running or falling,

and therefore player of all ages, shapes and sizes can continue to play for up to 10 years.

Played in swimming pools, the sport resembles its frozen water counterpart, except that

players use small, banana-sized sticks to push a metal puck around the floor of the pool. And that

instead of skates and pads and helmets, they wear fins and a glove–as well as goggles and snorkels.

Two teams of up to ten players compete, with six players from each team playing at once. There are

three referees – two in the pool and one on the deck – to keep score and call fouls. 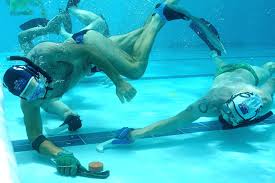 As few pools have underwater viewing ports, Underwater Hockey is not the best of spectator

sports. The game is best followed live on large screens, with images provided by underwater

videographers. Though it might be difficult to watch Underwater Hockey, with the right equipment it

can serve to be a thrilling spectator sport.