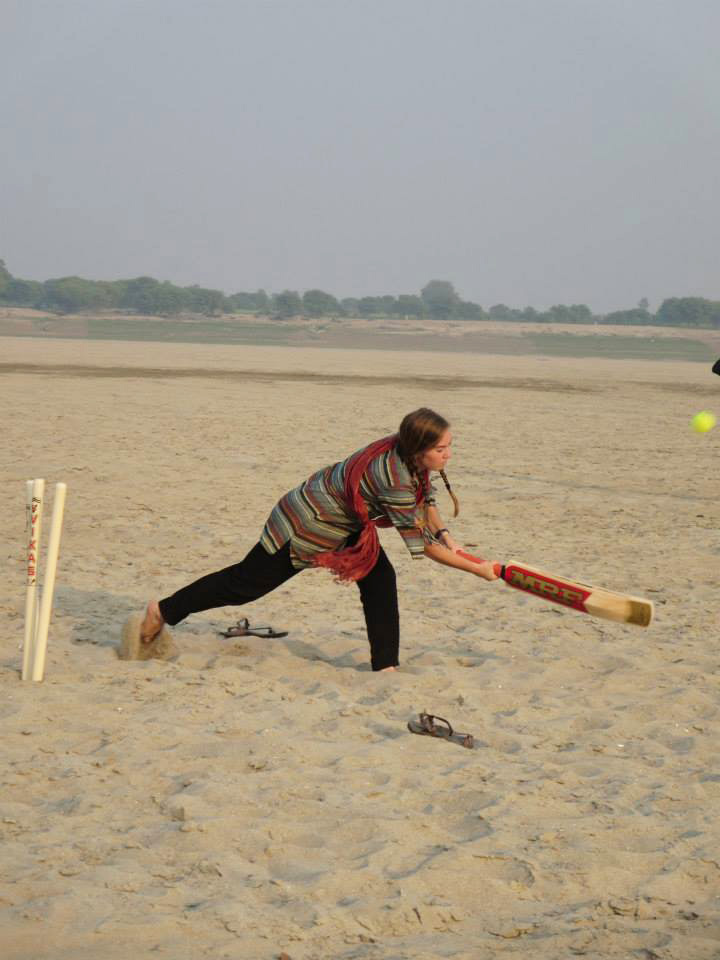 As an American studying abroad in India for four months, I was constantly looking for ways to make myself feel at home. I soon discovered that one of the best ways I could connect to Indians of all ages was through the wonderful game of cricket. I had never seen a cricket game before in my life, but I found that if I showed interest in the game, I could quickly make a friend who would explain the rules to me or at least tell me what team to cheer for. Every time I began to think I understood the rules, something would happened that I would need explained to me all over again. Cricket is a slow game that can sometimes take multiple days to complete, and it rapidly lost the attention of most of my classmates. However, I learned to love it, however slow it may be or I may be at learning it, because I saw how it could act as a doorway into Indian culture. I made it my mission to learn the game. 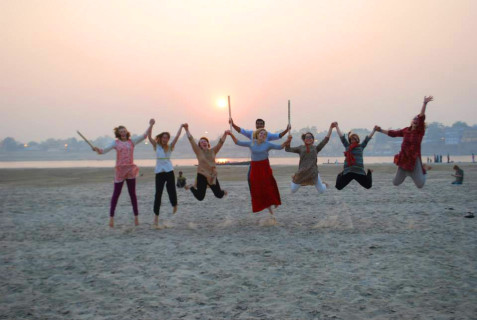 Jumping for joy after playing cricket until sunset

Over the semester I spent in North India, cricket was a constant. At my four week homestay in Jaipur, the whole family gathered around the television to watch the Jaipur matches. They patiently explained the rules to me as we watched together, all sitting on the same bed and the surrounding floor. Across the street from my house was a small park where the neighborhood boys would play every evening after school until sundown. I would often sit in the park and watch them play, trying to understand the rules of the game. I soon learned that there’s a game of cricket being played on every block in India.

After a little begging, I convinced the regional director of my program to buy us tickets to a professional cricket match in a Jaipur stadium. As I suspected, watching the game in person and being a part of an enthusiastically cheering crowd heightened my appreciation and understanding of the sport. The stadium had the familiar buzz of sports that every person, no matter where they’re from, could relate to. Music blasted, a jumbotron flashed the score and player profiles, and a dance troupe performed during lulls in the play. The game ended with the teams neck and neck and even my reluctant classmates were on their feet.

The highlight of my Indian cricket experience was when I finally got my opportunity to play the sport. We were in the holy city of Varanasi and I was enjoying wandering down narrow gullies of fragrant sauf and sparkling saris. For a classmate’s birthday, the group was surprised with a bag of cricket gear and a trip across the Ganga river to the sandy shore on the other side. We piled into a long rowboat and made our way across through the muddy water, and watched the magical skyline of the shoreline ghats grow farther away. We taught our director, the boatsman, and his children, Ultimate frisbee (a little too much running for the sweltering Indian heat), flew kites, and lounged in the sand. A group of us played a game of cricket. Playing the game is by far the best way to learn the rules – though I still believe our director was making some up as he went along. For the boatsman and his family our only available communication was through poor basic hindi and enthusiastic high fives. We played as the sun set and then headed back over the river at dusk. 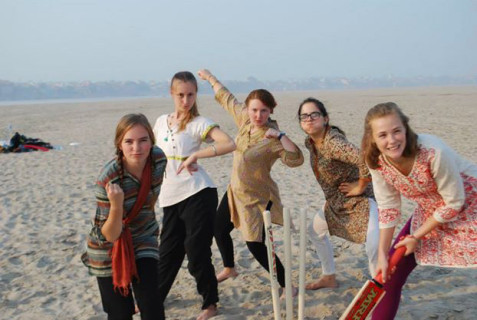 Some of my fierce cricket playing classmates and me

Though I still inevitably ask questions every time I watch a game, I feel like I’ve finally grasped a good understanding of the wonderful game of cricket. But what was still clearer than the rules to me was that the game was a way to connect to the country I was a guest in – a way make new friends by sharing a cheer, moaning over a loss, or slapping a high five. 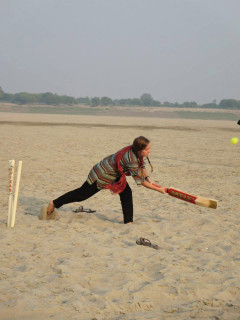 I get a hit on the shores of the Ganga River