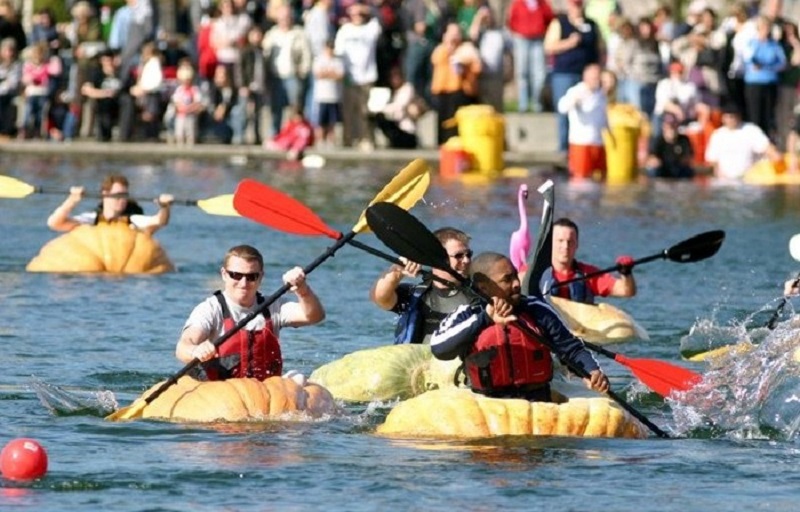 Set about 60 kilometers northwest of Halifax, and bordered by Long Pond–where Canadian skaters pioneered the game of ice hockey in the early 1800s–the Dill Farm in Windsor, Nova Scotia cultivates nearly 40 varieties of pumpkin. The farm is best known for its “Atlantic Giant” pumpkin–a varietal than can grow to 2000 pounds; the “Atlantic Giant” has secured several of the Guinness Book of World Record’s records for the world’s largest pumpkin. So what can one do with a plethora of oversized pumpkins? The Dill family created a sport.

Founded in 1999, the Windsor Pumpkin Regatta water race is now held annually in October on Lake Pesaquid in Windsor, Nova Scotia. The Pumpkin Regatta involves racing the large pumpkins – some weighing in at up to 1600 pounds – across the lake. Regatta participants hollow out the large pumpkins, and often decorating them before climbing aboard and paddling them across the lake’s 1640 foot span. The race is increasingly popular; the latest edition attracted 60 entries and close to 10,000 spectators.

The Windsor Pumpkin Regatta has inspired several copy-cat competitions, including one on Lake Champlain in Colchester, Vermont and one at The University of Wisconsin Madison.
The video below depicts the 2008 race, and the array of competitors paddling across the river in their colorful pumpkins.