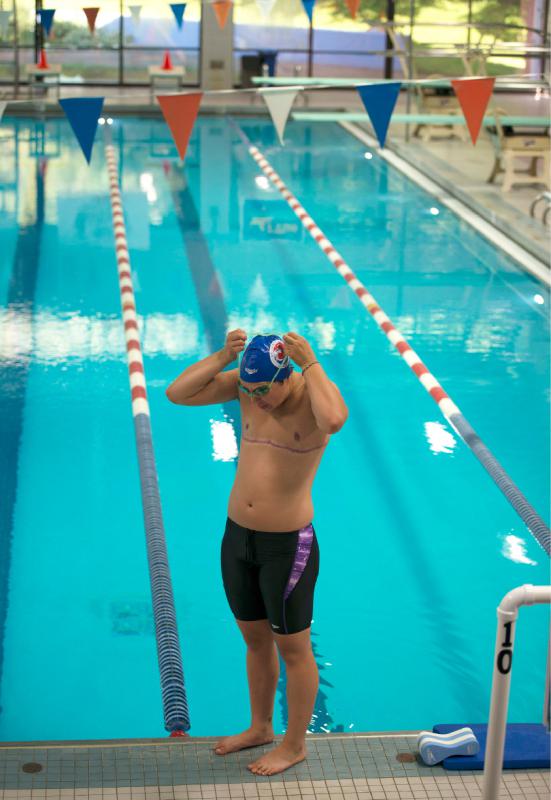 There are those who bare their writhing souls in public to make a living. And there are those who do it to make a difference. Schuyler Bailar is one of the latter. As a high school student in Washington, D.C., Bailar was a record setting swimmer who’d been recruited by several top women’s college teams.

Yet Bailar had always identified as a boy. The strains of gender dysphoria brought on chronic depression and a host of self-harming behaviors. In September 2014, instead of enrolling at Harvard as a freshman woman swimmer, Bailar took a gap year to get a handle on a troubling eating disorder. And on life. “Initially the decision was ‘Do I swim, or do I quit and transition,” he recalls. “I really didn’t want to give up swimming, but I also didn’t know how much longer I could do the living as a girl thing.”

Bailar shared much of the transition from girl to boy on Instagram, posting a photo of himself after breast removal surgery, and another of him holding a vial of testosterone before an injection. “I’m sure you’ve noticed changes in my appearance,” he wrote in a facebook post. “I am no longer girly or feminine; my chest is flat; I wear ties instead of dressed. This post is to affirm your suspicions: I am transgender.”

He was fortunate and found great support on social media, and also among friends and family. “Now I have two grandsons from your mother,” his grandmother, whom he describes as a very religious Korean woman, told him. Still intending to swim at Harvard, he kept Harvard women’s coach Stephanie Morawski in the loop. But without Bailar’s knowledge, Morawski called Harvard men’s coach Kevin Tyrell to ask whether the incoming freshman could swim with his team. Tyrell in turn called a team meeting.

“We talked about how we’re all about character and values,” Tyrell later told the Associated Press. “And I kind of gave my two cents. If we’re going to say that we care about others, then this is something we should consider. And basically all the guys said, within 15 seconds, ‘yeah, let’s do it.’” Morawski called Bailar to tell him he had an option of joining the men’s team. A few weeks later, Bailar accepted, becoming the first openly transgender swimmer to compete at a Division I school.

Bailar would have been a standout on the women’s team. He will probably struggle to keep up with the men. “He may not necessarily be leading the lane,” said men’s co-captain Christian Yeager. “But we are sure he will definitely contribute something more meaningful to the team.”

It’s unfortunate that Bailar’s inspiring story comes on the heels of another athlete’s transgender saga, one far more publicized and piloted and profitable than the Harvard swimmer’s. Because Schuyler Bailar has just swum the race of his life. And while he will never win a gold medal at the Olympics, or appear on a box of Wheaties, or pose in soft light and lingerie for Vanity Fair, he, Morawski, and the Harvard men’s team have set an example of decency, courage, and sportsmanship, an example we should value far above that fleeting obsession we call fame.