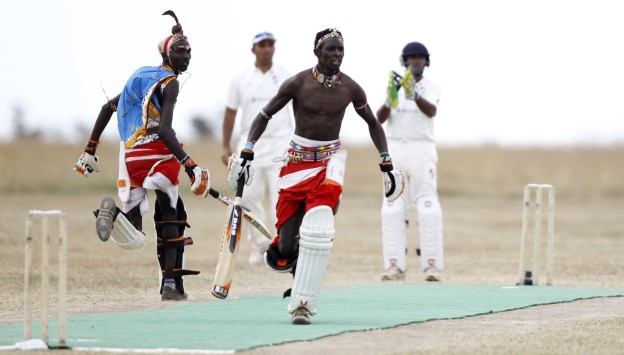 The Maasai are a semi nomadic tribe that moved south from northern Kenya and settled near the Tanzanian border during the 16th century. Known for their reliance on cattle, colorful traditional dress, and intricate jewelry, the Maasai have successfully maintained much of their ancestral lifestyle in spite of an encroaching modern world.

There are, however, many Maasai equally interested in adopting new ideas and activities. Among them are The Maasai Cricket Warriors, who use cricket to bridge the gap between the past and the present, blending traditional Maasai customs with the rules and regalia of world’s second most popular sport. The game was introduced to the Maasai in 2007 by Aliya Bauer, a South African cricketer and score keeper. Today a dedicated group show up to bowl and bat, some of them walking up to 30 kilometers from neighboring villages to attend the weekly practices. In 2012, the Maasai Cricket Warriors were invited to participate in the Last Man Standing 8-a-side cricket tournament in South Africa in 2012.

Because cricket was so recently introduced to their society, The Warriors don’t have many opportunities to play full matches. But the game already plays an important role in their community. Leveraging their popularity, the MCW work to raise awareness about health and gender equality issues, and are a motivating force for positive social change. Sonyanga Weblen Ole Ngais, the 23 year old captain of the team, says “our mission is to eradicate female circumcision… to fight for women’s and children’s rights, to stop drug abuse and environmental pollution, and to educate people.” The players also believe that youth involvement in cricket will bring down the incidence of drug and alcohol abuse in Maasai communities. It has hosted a mini-cricket tournament to spread information about HIV and Aids.

Playing in traditional Maasai warrior apparel instead of cricket whites, the Warriors radiate tribal pride, proving that they can embrace global culture without abandoning their cherished tribal roots. This is perhaps their greatest accomplishment–demonstrating that custom and modernity can coexist. In this way, they help prepare their countrymen for the challenges they will inevitably face. Channeling the spirit of their fearsome cattle raiding ancestors, the Maasai Cricket Warriors fight for a better future for themselves and all the Maasai people.