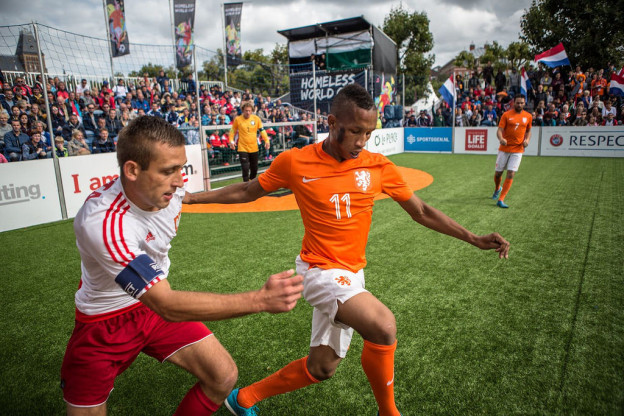 The world stage is usually reserved for politicians, trend setting technocrats, and millionaire, multiplatinum artists. However, there is one event that elevates what many would consider the poorest, most disenfranchised members of society to stardom: The Homeless World Cup.

The first Homeless World Cup was held in Austria in 2003, two years after Mel Young founded the organization to combat homelessness around the word. Since then the Homeless World Cup has expanded from its original 18 countries, 15 of which were European, to more than 70, representing every continent except for Antarctica. The Homeless World Cup organization works with local groups in 420 cities to organize football events year round. Their efforts culminate in a truly international World Cup event hosted by one of the participating nations.

“The ultimate aim of the Homeless World Cup is not to exist,” says Young. “Because there shouldn’t be any homelessness.” While working to eradicate global homelessness, the organization dedicates itself to uplifting its participants, instilling them with confidence, and making a permanent change in the players’ lives. Young states that 80% of the players involved in the Homeless World Cup have changed their lives forever– kicking a drug habit, finding a permanent home, or landing a paying job, as a result of their participation.

For many of the players, the effect is profound and personal. “[The Homeless World Cup] allowed me to regain my self-respect to take important steps in my life,” Says Patrick Mbeau, a member of the 2007 French team. Seunggug Jang, a South Korean player who became homeless after an injury left him partially immobile, credits the Homeless World Cup with his recovery. “I got my confidence back,” he says. “Now I can stand on my own feet and lead a better life.”

Homeless people live on the margins of society. It is all too easy to ignore them. Yet anyone who has witnessed this event cannot help but notice the endurance, the unwavering determination, and the players’ desire to improve their lives. By giving these people a showcase where they can display their talent and determination, the Homeless World Cup reminds us that these players, like all humans, deserve dignity and support.